This nordic inspired modern kitchen is light and bright, but grounded by the cinnamon warm tones of timber veneer doors.

J groove grips leave the door fronts clean and minimal making the focus on the contrast between the texture of the timber and the gloss of the engineered stone benches. Waterfall ends exaggerate the effect of the contrast.

The island bench doubles as an eating area with cantilevered ends on two sides allowing chairs (and legs) to be neatly tucked out the way.

Don’t miss the wall of glossy white two pack coated cabinetry that hides a pantry and masses of miscellaneous storage. The addition of the wall of cabinetry turns this seemingly small kitchen into a storage dream. 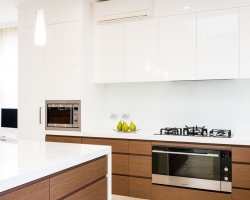 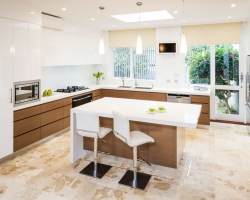 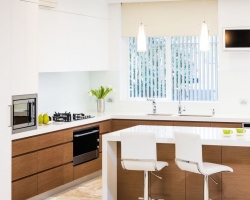